This is an odd installment of “Other People’s Words,” because even though the words are good, they’re not the primary thing I want to draw your attention to. What I want to have a look at this charming site, called “THEBLOG WEEMADE.” As the name suggests, it features drawings by young children. And the reason, as it explains it:

Here at THEBLOG WEEMADE, we find the artwork and creativity of kids inspiring, thought provoking, entertaining, and unpretentious. We think that reminding ourselves how children see the world is a valuable and enlightening process.

THEBLOG WEEMADE is a user-generated showcase. We accept posts from anyone and everyone. Scan and post your children’s artwork or your own artwork from when you were child. Found artwork. Anything!

Brian created THEBLOG WEEMADE in February 2008. The inspiration was a box full of his old schoolwork and drawings that his parents had kept over the years. Poring over all this old papers, Brian and his wife were entertained by how bizarre and imaginative a lot of the work was. He knew that there must be millions of people with similar material to share, so he decided to create a forum in which the artwork and creativity of children everywhere could be showcased.

Though I don’t like doing it, I’m taking the week off. I’ll be back next Monday.

While I’m away, how about a few reruns? They’re mostly fiction, and mostly my words, and some certainly could have been better. But the important thing to remember is that if you’ve never seen them, they’re new to you.

Late August in Washington is about as busy as a western ghost town. That’s certainly an overstatement, but excluding all the departures, very little has been going on.

And the departures, as you’ve probably noticed, are numerous. First, Karl Rove announced that he was leaving. Then, Attorney General Alberto Gonzales announced that he too would leave. At this point, it seemed like little more than the administration removing it’s most prominent dead weight. Neither man was popular in the country or with the Democrats in Congress, and so they were asked to go.

Whether these departures were meant to clear the administration from continued criticism or to signal the desire for a new way forward is an interesting question. One has to hope it’s a sign that the administration–which still has over a year in office–will stop invoking executive privilege and instead try to improve the now troubled economy, reform the Farm Bill, and possibly help to improve No Child Left Behind. Whether or not that is truly happening is something we’ll only know with time.

The other two departures announced in recent weeks, however are less explainable. Tony Snow, and to much greater attention, the possibly-not-leaving-now Senator Larry Craig have both announced an intent to leave Washington.

Tony Snow’s departure has gotten relatively little coverage, but some that it has is quite interesting. Mr. Snow, the White House spokesman who is battling cancer, has signified that he has to leave because he’s not making enough money. At a salary of $168,000 annually, that raised more the a few eyebrows. The most prominent of those were at Salon.com, where the magazine asks “Why is Tony Snow’s 401(k) empty?”

The question David Gross encourages us to think about is this: how did a member of this administration, which is so keen on abandoning the current Social Security structure and ending defined benefit pensions in favor of 401(k)s, fail to contribute to his 401(k) during his tenure with FOX? It’s an interesting question, and Gross’s answer makes for an interesting weapon in the battle for greater government-provided social benefits.

Senator Larry Craig’s intent to depart has gotten the great deal of attention. Both because he is now waffling on it, and because it seems based on strange circumstances.

Regardless of what did happen in the Minneapolis men’s room, Sandip Roy at Salon.com reminds us that it was not sexual intercourse of any kind. In his defense of Larry Craig, Mr. Roy says a few odd and unconventional thing–like that the hand jive that Mr. Craig preformed in the bathroom is akin to going out to a singles bar. But despite this, he mounts an interesting a troubling contention that Mr. Craig’s resignation has more to do with homophobia than real wrong-doing. After all, Senator David Vitter all but admitted to cheating on his wife, yet is still in office. More interesting still, Mr. Roy argues that gay rights advocates shouldn’t be so quick to rejoice in the face of Senator Craig apparent ouster.

Two interesting articles, both worthy of attention. And yes, this is what you get when I have nothing to say.

Bob Thurman is an American Buddhist. At TED2006, he gave a great introduction to the ideas of interconnectedness and compassion. It’s a really good summary of the concepts; he has fun with them rather than dwelling on their nature and substance.

I found this though of personal value, who gives a great synopsis thusly:

It struck me because I’ve always considered how heartbreaking it is to be compassionate if it means taking on another person’s pain. He explains this paradox of how embracing someone else’s pain actually makes us see ourselves differently. And most remarkably, the way to help those who suffer is by having a good time. You have to listen to him to really make sense of this, but in part the key to compassion is that it is more fun (and by this I think he means rewarding) than focusing on only yourself.

The video is embedded below (removed, it broke the layout). The page for the talk (which has it downloadable as both audio and video) is here.

I was so pleasantly surprised by this conversation between Charlie Rose and Andy Stern, the leader of the Service Employees International Union, that I couldn’t avoid posting it. Mr. Stern, whose group splintered from the AFL-CIO a few years ago, shows himself to be an acute observer of the problems of our country and the world. He also shows a willingness to go beyond traditional methods: he’s tried to work with Republicans, organize a comprehensive and sensible national health care plan, and organize worldwide (for better or worse), seeing that employee of the same company have a great deal more in common than different. I would really recommend watching it, even though I realize that a 30 minute video is kind of awkward to view on the internet.

To see it bigger (but the same resolution), go to Google Video.

Today is Father’s Day. As is his custom, Frank Warren, PostSecret‘s curator, has posted a number of lovely and heart-breaking secrets from people all over the country. And though the site is not without it’s failings (most notably that secrets only stay up for a week), it’s consistently fascinating to read other people’s anonymously disclosed secrets. It’s a kind of immediate intimacy that seems to never get old.

In case you’re too lazy to give it a look, here are two of my personal favorites from this Father’s (though shouldn’t it be Fathers’?) Day. 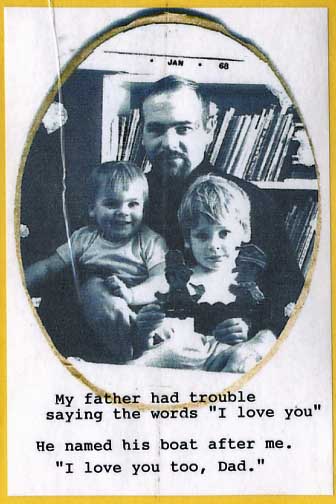 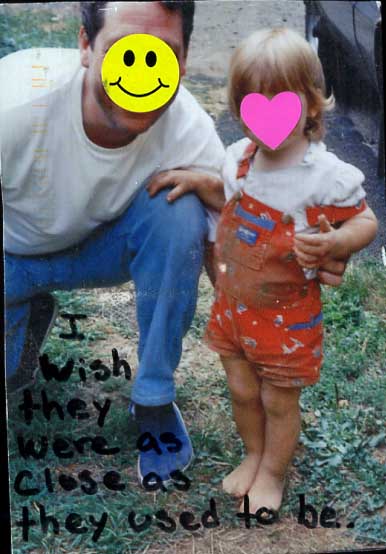