The idea of quantifying or charting writing–or any form of art for that matter–strikes most people as at best odd, probably unreasonable, and likely sterile and academic in the worst ways. To Dead Poets Society fans who remember the–literal–tearing apart of an essay that endeavored to do just this, how presumptuous such an effort can be is clear.

Nonetheless, I’ve been thinking a lot about trying to understand, and perhaps quantify, the blogosphere. This is driven both by my presence in the blogosphere, and my desire to understand as much as I can about everything, regardless of how unimportant these things may seem to others.

So on a recent night, when all my failed thoughts about the topic made something mildly coherent, I had to write about it. In hindsight, I recognize that the idea isn’t as revolutionary as I thought, but I’d already made the decision.

So, the basic idea at which I arrived is that we can chart blogs along two axes–already eerily similar to the method chastised by Robin William’s character in Poets. This is obviously limiting, as no two considerations can ever determine conclusively if a blog is worth reading or not. The most notable factor that this two-axis system excludes is timeliness or frequency. Certainly one is less likely to consistently read a blog that is rarely or sporadically updated.

This system also ignores issues of design. Certainly the design of a blog can make it easier or harder to read. I, for one, find the current front pages of Gawker blogs difficult–everything bunches and ends up looking like clutter. That doesn’t stop me from reading them–with a feed reader, of course–but it does make me less likely to visit them. Barring these considerations, however, I think this system can work relatively well.

I should probably also make clear that I don’t claim a blog can be conclusively marked on such a system. Where I may see a deeply flawed blog full of less-than-interesting writing, others may see the greatest literature of the 21st century. Nonetheless, I think most people would, overall, agree to the basic formulation of this system.

The vertical axis in this scheme is specificity, or how relevant a blog is to the potential audience. It is rated inversely, thus, the more specific a blog is, the lower it’s “specificity” score. At one extreme of this axis, you find the extremely personal. (“I fed my dog today, a little more than usual. He’s seemed really hungry recently. I wonder if it’s because I painted the study.”) These are blogs that are essentially relevant to the writer and the ten people who know them best, after that most people just aren’t interested.

At the other extreme of this axis you find something with very wide, if not universal appeal. This is the type of thing you’re likely to find in most newspapers or magazines. It should be noted that something can be specific to say, gadget nerds, but still be rather universally read. Thus, specificity could be seen as self-centeredness. The difference is between the friend who only talks about herself, and the one that’s more interested in sharing ideas, facts, news, or cool videos–which are interesting to the audience of readers, not merely the author.

The horizontal axis of this system rates a blog’s novelty. At the very low end of this spectrum you find the very common. As just one example, it’s the posting of “This is so funny” followed by a link or the embedded video of Miss Teen South Carolina, or Chris Crocker, or Seth Green imitating Chris Crocker–video or links which, when posted, have already been seen by the entire interested audience. At the other end of this spectrum is the extremely novel, which in these internet times is usually a truly unique idea of the author, an obscure link the audience has never seen before, or well-presented insight into another perspective on the world.

Having established the criteria, we can thus plot blogs on a four quadrant system, as I’ve done below with a few of the better-known blogs I read. (Color is irrelevant, remember that specificity is inverted.) 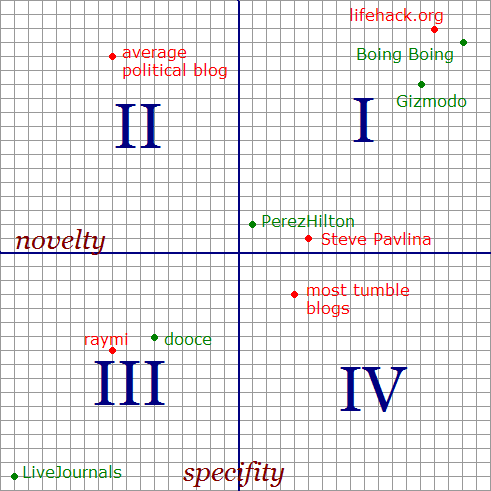 Because it’s convenient, and a number of bloggers were math nerds in high school, I’ve cribbed the basic numbering of Descartes’s four quadrant system.

Thus, in the first quadrant (I) we have what are generally considered the best blogs–those with the largest readership and the broadest fan base. They are, because they’re both consistently novel and rarely too personal, considered the best by the widest swath of people.

As you may then expect, the third quadrant (III) are generally diarists–and the least likely to be widely read. I’ve derisively put Livejournals in this category because they’re notoriously the place where teenagers go to rant and rave about how bad their life and family are–something they now probably use MySpace for. These writings are surely interesting to a few of their closest friends, but to the wider public, it’s useless drivel. It should be noted, however, that some dairy-blogs are pretty widely read and well known. Dooce is probably the best example of this, but hardly the only.

Quadrants II and IV are generally more difficult quadrants to define. In the second quadrant, you’ll find primarily impersonal blogging that isn’t particularly unique. The classic example of this is a blog that features little more than snippets of the authors favorites news stories–something done by too many political blogs. Quadrant IV is a place for the more specific but also more novel. This is where I think most tumble blogs–or tumblelogs or tumblogs, whichever you prefer–belong, because their material is usually diverse but centered on the owner’s tastes.

For myself, I would generally like this blog to fall into the first quadrant, though I think it has a tendency for falling into the fourth. This makes an important point: blogs are not necessarily consistent. The average story at Boing Boing, for example, is close to my dot. However, every once in a while, they’ll run something extremely old or mundane. Similarly, Steve Pavlina is usually near his dot, but when he explains how he’s going to New York, I’m never very compelled. Nor when he talks about the law of attraction. But overall, where they tend to be is more important than where a blog sometimes is, and so that’s where I’ve put them.

I hardly consider the blogosphere ordered after this brief piece. There are certainly hundreds of other ways that blogs could be cataloged, charted, or trivialized. I just thought I’d throw my hat into the ring.

5 responses to “Charting the Blogosphere”