Yesterday, as you’re no doubt aware, was the sixth anniversary of the terrorist attacks that made America notice radical Islam. If our President had been one for rhetorical flourishes, he may have reminded us that it was a day “that will live in infamy.”

If there is another day where America’s world changed, the only 20th century examples seem to be Pearl Harbor, or perhaps the launch of Sputnik. But on neither of those days did the world change inexorably, rather Americans were shaken into awareness of how the world was. Aware that Japan was an aggressive and powerful force to our west. Aware that the Soviets could indeed best us with technology.

So, it seems, is the case with September 11, 2001. Radical Islam existed before that date. The United States government even financed its fight against the Soviet Union, among others. But the public at large was blissfully ignorant of it’s existence and the danger it posed. Now they can’t seem to forget it, and politicians are trying not to let them do so.

Nearly 3,000 people were killed by 19 terrorist on September 11, 2001. And questioning the importance of that date is not to lessen the tragedy of that event. Surely the lives of thousands and thousands of people, in America and around the world, changed as a result of those deaths. And as a result of the physical destruction and chaos that resulted.

But the world did not change that day, it merely became more aware of itself. Suddenly, in the rhetoric of politicians, America was under attack. Somehow it was forgotten that the World Trade Center had been attacked (though less severely) in 1993. And that we managed to get back to normal life. 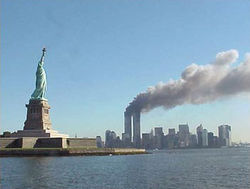 Surely the country changed as a result of the September 11 attacks. America has toppled two states since then. We’ve waited countless additional hours in airport security lines. We’ve allowed countless previously unthinkable incursions into our privacy in the name of greater security.

We’ve also weakened al-Qaeda. We’ve made a mess of, and taken a small step toward greater stability in, Iraq. We’ve lowered the price of opium-based drugs worldwide, and increased their purity.

Surely the world has changed since 9/11/2001. I make no claim that it hasn’t. But I would also ask that we stop using the rhetoric of “pre-9/11” and “post-9/11.” The world did not change that day, we as Americans just became more insecure about our position and safety in the world. Not because we were in markedly greater physical danger, but because we were and are suffering from markedly greater psychological turmoil.

Encouraging and nurturing America’s feelings of insecurity could possibly have prevented gravely bad policy, like our sustained adventure in Iraq. But it did not. Instead it has been used to impinge upon the rights of Americans and encourage their fear. And that’s down-right unpatriotic.

I’ll leave the last words to Joshua Coleman, talking about the effect of fear engendered by the pre- and post-9/11 dichotomy.

What scares me is the way that all of the non-stop terror talk contributes to a deterioration in our national character. Fear makes people more mistrustful, more prejudiced, and less compassionate to their neighbors, local or otherwise. It makes them less likely to participate in politics or join social groups. Labeling others as terrorists trivializes whatever real gripes they have against us in the broad brush of history. It dehumanizes them and paves the way for military campaigns that contribute to an increase in the likelihood of future attacks. It decreases the probability of finding a lasting, non-violent solution to complex international problems.

So, I don’t worry so much about being killed in the next terror attack that’s supposed to come from “over there” — the one that gives us the Code Orange at the airport when the threat is presumably elevated. I worry about the Code Red that comes from the kid over here who has no future, no education, and nothing to lose because we have given him no reason to believe that people care about what happens to him. THAT is what we should be afraid of.

7 thoughts on “Did the World Change on September 11?”