In light of recent financial news, Steve Finch files an interesting report that he asked us to file under, “I wonder if that would work.” 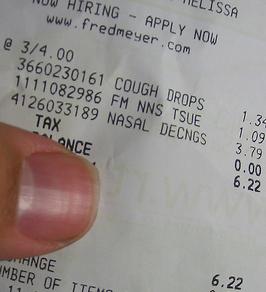 WASHINGTON — The Secratery of the Treasury today announced a interesting plan to combat the economic slowdown that has led many to speculate that the country is in the midst of a recession: a sales tax holiday.

The plan, which would require a great deal of legwork to get off the ground, is rather simple: to stimulate spending and recharge the economy the federal government would eliminate all sales taxes across the country for an entire week.

The problem, which critics were quick to point out, is that the federal government has no jurisdiction to lower sales tax rates. Sales tax in the country is controlled by states and municipalities.

To these critics, the secretary was quick to offer this solution: the federal government will reach agreements with all states–who are then responsible for reaching agreements with municipalities–to reimburse them for all income lost during the holiday. Speaking frankly, the secretary said, “We feel this system will be faster and more beneficial than the tradition plan for a tax rebate, which takes a great deal too much time to create and then reward to citizens.

“We must always remember those words repeated to the point of meaninglessness: targeted, temporary and timely. We feel confident that this plan meets all of those criteria better than any alternative.”

Asked about states and municipalities without sales tax, Treasury’s response was that they’d made the decision that making special exceptions for these cases was impractical, and so they would simply maintain the goal of keeping sales taxes at zero for one week across all the states.

Economists’ views on the topic were mixed. Some felt that the plan was innovative and as likely to work as anything else. These “optimists” made the point that all stimulus plans fail, and this one’s failure is likely to as insignificant as all the others.

Others made clear that the plan would be a logistical nightmare. “Not only must the states and municipalities reach hurried agreements with rough projections of earnings for what is meant to be a week of extraordinary spending. But the headache it will be for businesses whose computers are built to assess sales taxes automatically is hard to imagine,” offered Bob Davis with Americans for Simplified Taxation.

As with all such plan, this must be approved by Congress. Both the Speaker of the House and the Senate Majority Leader are hopeful that they will be able to quickly pass the program without much hassle. Speaking frankly, the speaker admitted, “But I don’t know the last time that happened.”