Maslow’s hierarchy is neither incredibly new nor incredibly novel. If Wikipedia‘s to be believed, the idea was originally published in 1943 in a paper called “A Theory of Human Motivation.” Further, it’s an idea that, once known, seems to have been all but self-evident the whole time.

Maslow’s basic idea is that certain needs always take precedence over others. That there are primitive or basic needs that, if unfulfilled, leave people unable to seek higher–perhaps one could say more evolved–needs.

In short, if one has a desperate need to eat, they’ll be unable to contemplate their position in life and reach any type of self-actualization. Because self-actualization is a higher–which is to say less essential–need, it loses out not only to physiological needs, but also to the need to be loved. 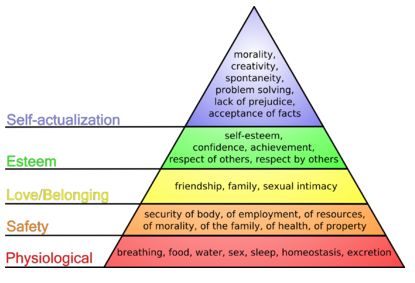 In Maslow’s system, there are five levels, as the pyramid above shows. The most basic level is the physiological–things like eating, sleeping, and breathing. Above those are the needs for safety–of home, health, family, and employment. Above those are interpersonal needs for love and belonging among a circle of family or friends. Near the top, Maslow placed the need for esteem–both from oneself and others. At the top, he placed self-actualization in morality, creativity, and the like.

This system has been critiqued–and rightly so–for it’s absoluteness. Certainly people with unfulfilled lower needs can and do achieve some of the higher needs. Being unloved can lead some to more prescient self-actualization; being hungry could paradoxically make someone more respectful and respected.

One way the hierarchy is useful: it makes painfully clear why so few revolutions are started by the people who may have the most to gain by them.

These needs probably aren’t nearly as contingent as Maslow’s hierarchy suggests. It’s not as if being hungry before lunch makes one unable to work toward the higher need of security in employment. People regularly delay short-term fulfillment of a basic need in persuing higher goals. But this deficiency doesn’t deprive the hierarchy of value–we can use the framework but ignore some of it’s more unlikely implications.

One way the hierarchy is useful: it makes painfully clear why so few revolutions are started by the people who may have the most to gain by them. The poorest of the poor, without homes or foods, often have the most to gain if society reorders itself. But they rarely call attention to their plight in any meaningful or widespread way. They’re likely more concerned with needs for food and shelter than with the needs of society’s malcontents as a group. They likely don’t even recognize their presence in such a group.

Thus, it is often the better-off who act as spokesmen for the lowest of society. Very few homeless form together into activist groups without outside influence. The common reason society would offer for this fact is that the homeless are universally too heavily drugged to act–something I find at least a little offensive. The reasoning that comes from Maslow’s hierarchy seems more reasonable than the theory that the homeless are uniformly too lazy or loaded to speak out about their needs.

Similar analogies can be found all over the world. The situations in Burma, North Korea, or Zimbabwe are all similar. Despotic ruling regimes can easily maintain control because the people over whom they rule are so concerned with lower needs that they have little time to pay attention to macro-economic policies or leaders that are almost certainly doing them harm. “Third world” farmers harmed by the dumping of cheap subsidized crops into their country from abroad rarely manage to rebel because they don’t have the time or energy.

Though I wouldn’t risk my life in defense of the academic truth of Maslow’s hierarchy, I think it can be a useful tool.

But contrary to Maslow’s theory, people can–and do–act without their lower needs fulfilled. The Burmese protesters show that even if physiological or security needs are unfulfilled, people may decide that there is more to be gained by fulfilling their higher needs first. After all, if they truly reorder the culture of their country, they would be more likely to create a secure and physiologically-satisfied population.

Though I wouldn’t risk my life in defense of the academic truth of Maslow’s hierarchy, I think it can be a useful tool. A reminder, from time to time, that there are simple reasons that injustice is not often stopped by those treated unjustly. Whether or not those with their lower needs fulfilled have a responsibility to assure that others can get the same level of fulfillment is a debate I’m not ready to entertain. But I think in light of some of Maslow’s insights, its something everyone should give at least a second’s thought.