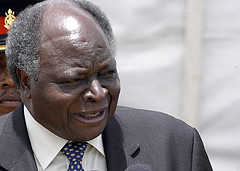 The world recently celebrated a rather unceremonious “monthiversary.” Kenya–which up until a month ago was often described as the brightest spot in East Africa, if not the whole continent–is still in chaos. See some of the haunting reports and photographs of The Vigilante Journalist if you doubt that fact.

A month ago Kenya’s president, Mwai Kibaki (at right), “won” reelection. After this incredibly questionable result was announced, “tribal” violence “erupted.” Estimates are that by now at least 800 have been killed and 300,000 displaced. Though many forces–best known in America are presidential candidate Barack Obama and former UN Secretary General Kofi Annan–have attempted to reach some accord between President Kibaki and the oppositions leader Raila Odinga, none have succeeded, or even produced much externally-visible progress.

If one pairs this sad story with the continued mess of Darfur, you’ve got a good base for a pessimistic soup which proves that the international community is unable or unwilling to help create lasting peace on the continent. Even worse, you could find proof that Africans themselves are incapable of living in peace.

But I wouldn’t say that. Nor would I interject the ever-growing messes of Somalia, Zimbabwe, and the ever-simmering border dispute between Ethiopia and Eritrea as proof that East Africa’s the bad side of the continent. Or that nothing can change.

We could reasonably say that all of this makes a strong case for a reconsideration of priorities at the United Nations and other international bodies. That it also shows signs that Africa’s still growing and maturing, and though it may sound (or even be) patronizing, the current problems on the continent are necessary growing pains for young nation states with limited resources.

And so I can tell you that though we could make this to look like a strong case for the United States to disengage from the impotent United Nations, it’s not. And that I remain hopeful that though progress in Africa and elsewhere is slow and all UN actions are encumbered by the veto power of self-serving states like China, Russia, and the United States I think the organization shows progress.

Surely the Bush presidency and the farce that was made of international law in invading Iraq was bad. Surely it is troubling that both Russia and China are willing and able to stand up against even the most well-intended efforts to intervene for human rights.

But in the broad stroke of history, progress is unquestionably toward greater openness, greater rule of law, and greater democracy. Surely there are a number of painful steps left–many ugly and troubling steps–before the world arrives at the place I’d like it to be. But as long as and as strong as I can, I’ll hope that someday soon the world will be more like the hope for Kenya from last December, and less like the pessimism engendered by the Kenya of this January.

One response to “Kenya and International Impotence”