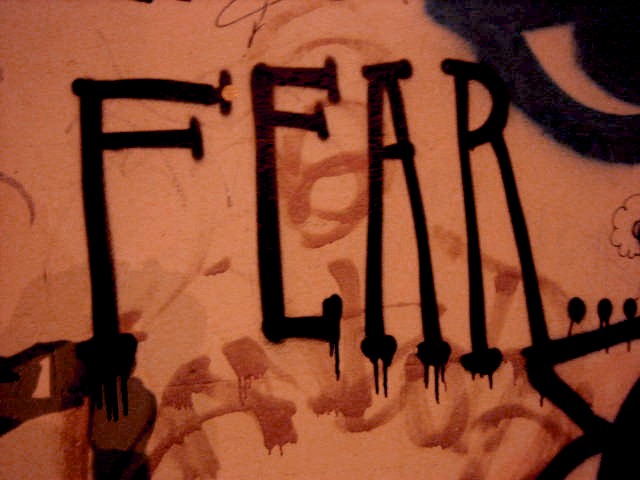 In a contemplative mood last night, I made a few tweets about fear:

Most things we don’t accomplish in life have one root cause: fear. We fear failure, success, humiliation, poverty, etc so much we don’t try.

Most cruelty is a reaction to fear. Few harsh actions come from a place that isn’t afraid of the vulnerability of openness.

Exposing yourself to the world completely: your fears, your dreams, your accomplishments, your abilities requires incomprehensible strength.

People depend completely on each other but fear each other so much they get very little done.

So to put it mildly, fear was on my mind. The story I’d tell about why is as follows: I’ve made a number of quite positive changes in my life in the last few years—lost 70 pounds, got promoted, started a business, began exercising regularly, changed jobs—and I was contemplating what the biggest reason for them was. What I came to for each and every one was that I’d gotten past the fear and insecurity that had previously stopped me.

And as I saw Alain de Botton tweet soon after all of my tweets, part of the reason for the changes was that I’d started to be more afraid of not doing anything than of making the changes I have.

In her research Dweck has found two basic ways of relating to the problems that we face as we move about the world.

But there was another, more fundamental reason for the shift in my life and it was based on Carol Dweck’s book Mindset. Dweck’s spent most of her career studying why some people are more resilient and successful than others. I don’t think I’ve ever seen her phrase it this way, but in my reading her answer comes down to fear.

In her research Dweck has found two basic ways of relating to the problems that we face as we move about the world. The “fixed mindset” grows out of the belief that our abilities to accomplish things are essentially capped: when we fail to do something it is because we’re just not capable of doing that kind of thing. This contrasts with the “growth mindset”, which takes failure to do a complex math problem, for example, in stride as a part of the learning process. In the growth mindset, my current inability to do this problem means I can now learn how to do it, not—as the “fixed mindset” might have it—that I’m an idiot who’s bad at math.

Personally, I’ve lived most of my life with the “fixed mindset”—from early on I was tagged as a “gifted” (read: smart) child, which tends to lead in Dweck model to the fixed mindset. Praising someone for being smart, she points out, gives them a sense of possessing a fixed thing of worth—their intelligence—that they then will tend to protect jealously. If you want to praise a child for something they’ve done, focus on effort and learning, she encourages.

When my self-appraisal is strongly tied to my ability to project intelligence and mastery, I will avoid situations in which there is a risk I’ll look stupid or inept.

And learning about and understanding the foolishness of the “fixed mindset” way of relating to the problems you face has made such a profound difference in my life I’d find it hard to understate. I’ve become much more willing to fail and much less wedded in my mind to the value of my intelligence. (Beyond reading Dweck’s book, it’s worth mentioning that part of the shift was a result of the world making it increasingly clear to me that idle intelligence has essentially no value.)

The fear that drives the “fixed mindset” is a primal one. When my self-appraisal is strongly tied to my ability to project intelligence and mastery, I will avoid situations in which there is a risk I’ll look stupid or inept. The way this manifested, for me, was an increasing specialization in things of very little worth to the world at which I was relatively skilled. Trivia games were a favorite of mine; business—a giant area about which I knew nearly nothing—was not.

As an ego defense mechanism I’d essentially come to the conclusion that the things I wasn’t good at were things I’d never be good at. I hunkered down and really built a tightly-bound identity around what I perceived to be my strengths. I was an overweight, inactive, introverted person who knew a lot and read a lot and was pretty much set, thank you very much. I’m stated this a bit like it was something I rationally and thoughtfully decided to do. It really progressed unconsciously, through many small decisions. I had just slowly chosen for myself that kind of life.

Seeing the whole constellation of consequences that came out of this simple dichotomy of mindsets Dweck presented, I was a bit humbled and embarrassed. So much of who I was could be traced back to this simple fear that I’d look dumb. Realizing a truth like that about yourself is the first step to change. It allows you to begin to see, intercept, and change the thoughts and fears that you define yourself by.

To get grandiose, the “breakthrough” I’ve made that’s changed my life in uncountable small ways is to realize that my fears—of looking stupid, of saying the wrong things, of asking for help—were the single biggest obstacle between who I was and who I really wanted to be. It’s not been easy to move through them—and they do still get in my way—but I’ve made tremendous progress by understanding, naming, and working with the fears I feel about the things I know I really should be doing.