My Problem with Fiction 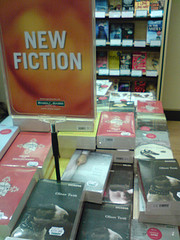 Everywhere I see people who don’t understand how the world works. This includes, but is hardly limited to, when I’m standing in front of the mirror.

To my limited understanding, the world is wonderfully complex place full of wonderfully interesting people doing their absolute best to live the most useful lives they can. And I don’t understand even half of what happens out there.

And I don’t much see how fiction helps me or anyone else to better understand anything.

In that paragraph is the fundamental hangup I seem to have with fiction. It’s fictional. There’s a tautology if ever one existed.

I’m certainly no lover of literature, so perhaps that’s the simple nature of this beast. After all, I’ve also never been much a fan of any form of art.

Paintings. Drawings. Oils. Giant pieces of abstraction. It all seems rather dead to me.

If we were to accept the fairly reasonable, if not necessarily true, premise that art is fundamentally a window into the artist’s mind, then I suppose my fundamental dissatisfaction with fiction is that the people who write it don’t seem terribly interesting to me. They’re mostly–at least of the authors I frequently hear of–white, middle-aged, and male. These men are like me, or like what I’m going to be. I’d much rather have insight into the mind of a Russian housewife or a Congolese general than into the mind of a middle-aged white American.

But I like to read journalism. I usually struggle to read fiction. In some way, I would argue that even when the two are written by the same person, the first explores others, while the second explores nothing more than the self.

I’m certainly devaluing fiction. It’s an exceptionally useful tool to elaborate your personal understanding of the world. And when you understand something about the world differently than most others, that’s a tremendously valuable gift you give. Your fiction is then a way for people to learn about the world.

So too is it tremendously useful if you lived quite long ago. Roman fiction is often seen as more useful for understanding the world of the empire than are the histories made by friends of the emperors.

But most fiction I see, and most fiction I see people read, is dull. It’s John Grisham. It’s Tom Clancy. It’s Danielle Steele. And I can’t seem to understand the value in that. And I wonder: Am I the only one?

To be fair, I don’t mind watching a good fictional movie. And part of my dissatisfaction with fiction in print is probably that I read slowly. Or not at all. But those aren’t the only reasons.

3 responses to “My Problem with Fiction”