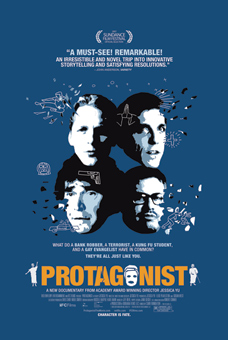 Having been rather satisfied with “Be Your Own Protagonist,” the movie Protagonist–which seems to be available from Netflix (whose Red Envelope Entertainment holds the rights) and nowhere else–almost necessarily piqued my interest. And though the summary sounded luke-warm, I decided that on the title alone I had to give it a shot.

I’m glad I did. Much as my favorite graffito recommends, the documentary paints its four personages as protagonists in epic Greek dramas. Jessica Yu’s film offers, in my mind, an easy comparison with onBeing. With the chief visual component of both being subjects telling their story to the camera, the comparison is easy and apt.

Protagonist, aside from being longer than the web-project that is onBeing, is much more explicit and methodical. It opens with a dramatic voice saying, in Greek, “Tell it still. There is pleasure in hardship heard about.” Throughout, as the stories told by the film’s subjects unfold, so to does a classic tragedy played by wooden puppets.

If one managed to miss the implication of that play, Ms. Yu clearly delineates each phase of her classic drama. Here, indeed, is my one displeasure with the film. The effort to tell these contemporary tales as Greek drama can sometimes fell clumsy and heavy-handed. An attempt to mold and bend them a little to make them conform to the external structure to which they don’t strictly comply.

But they fit relatively well, and usually effortlessly. And the stories, though none rare or unlikely enough to win their own full length documentary, are all dynamic and interesting. Mark Salzman’s discovery of and rabid fondness for kung-fu as a way to end his stint as a weak and bullied teenager. Hans-Joachim Klien’s embrace of radical violence after he saw police beat a woman. Mark Pierpont’s embrace of his Christian ministry after finding that through religion he could triumph over homosexuality. Joe Loya embrace of a life of crime after finding that retaliatory violence against his abusive father felt good.

These are all interesting story, and all told by people well aware of the grand arc of their lives. Though it’s possible they’ve retrofit their story’s into Yu’s desired arc, they feel so natural and straightforward in their telling that I find the possibility unlikely.

The stories, as your would rightly expect, all have clear resolutions. Clear moment’s when the men’s absolute embrace of a certain mode of living is recognized as unwise and then rejected. Well established end points that seem to say clearly that their stint as classical protagonists ended. Surely, every life traces such an arc. I feel comfortable seeing that as Yu’s message, and I’m chastened to not have thought of it first.