The Average American Male, a novel by Chad Kultgen, is something I would probably never read if it hadn’t been both on the recommended shelf at a local bookstore and on sale. At the time I thought that the cover was nice enough (big sans-serif letters in stark black and white), that the title was interesting enough, and that the price was reasonable enough that I would get it. Besides, I hadn’t read much fiction recently.

And the book begins with a relatively strong bang, the first chapter being only one sentence long. Chapter One, titled “Christmas with Mom and Dad,” has only these three words, “Same old bullsh*t.” I got a good chuckle at that sentiment, which, even if I don’t share, I can certainly understand. 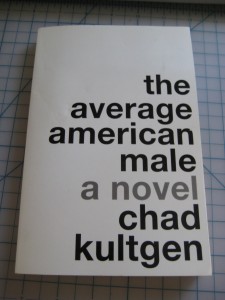 But from there on, the novel becomes an endless profanity-laced discussion of sex and pornography which left me moderately disturbed. This is surely something teenage boys would love to be assigned to read, may even choose to read, but to people outside of that bracket, it’s perhaps too much. If one can press past the obscenity, which is no minor feat, the novel does tell a relatively interesting story.

The story’s narrator is, as the title suggests, “the average American male.” That assumes something inaccurate about average: he’s a white, college-educated, relatively well-off twenty-something living near Hollywood; but you get the idea.

What I came away with was this: The Average American Male tells a story I probably would have been enamored with at 17. A time when I thought there was nothing more honest in art than sex and profanity.

But the real question posed by The Average American Male is whether this is autobiographical fiction or biting satire of the concept of a sex-obsessed “average American male” who has become a rather prominent cultural trope. As Toby Young, author of How to Lose Friends & Alienate People

writes in his blurb:

I can’t figure out if this book is a heartfelt dispatch from the front line of the battle of the sexes or a brilliant send-up of the way the male point of view has been misrepresented by militant feminists. I suspect if may be both.

And though Young’s paraphrase is perhaps over-complimentary back-of-the-book blurbage, that’s the final and vexing question I had. What is this book? And, at the end of it, I wasn’t sure.

The book’s website suggests satire, beginning its description with a critique of what Dr. Phil, et al. say that men are like. But I can’t deny the feeling that this is tacked-on analysis in a desperate effort to make the novel more interesting. Instead the book feels like an earnest autobiography by a man who is genuinely concerned by little more than sex. Perhaps that is the highest height of satire, but I’m not so sure.

Some things do suggest satire, not least of all the startling flatness of every single character. And though I’m tempted to believe that this is simply caused by Kultgen’s inexperience, I can’t escape the feeling that this might have been intentional. The odd ending, too, offers satire, though not explicitly.

In the end, both ends of this conundrum feel troublesome. This story could either be disturbingly shallow and aimed straight at the heart of a teenage boy, or a decidedly unsure satire about how no man could be as shallow as some want us to believe. For now, I’m not saying which it is.