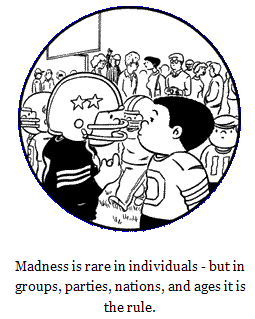 Since my early years of high school, I’ve become more and more convinced that comics published in the local newspaper are little more than bland space fillers. Foremost in my mind among these problematically bad comics–which are also those I used to like most–are Garfield, The Family Circus, and Dilbert. Garfield always mixes the loser, dumb dog and lazy, food-loving cat stereotypes. Dilbert does little more than illustrate an office-drone’s daily annoyances. The Family Circus inevitably reverts to basic family stereotypes without much value or meaning.

And so it was with utmost pleasure that I stumbled upon The Nietzsche Family Circus. The brilliant website–which has been around for quite some time–pairs bits of Nietzsche’s signature existential philosophy with an averagely meaningless frame from The Family Circus.

My favorite results are when the young Billy gives his father some truly meaty bits of philosophy. There’s the great one in which while his shirt is being buttoned by his father he informs the older man that: “For out of fear and need each religion is born, creeping into existence on the byways of reason.”

Or on the swing young Billy says, seemingly to no one, that “God is Dead” and we have killed him.

Of course it is somewhat difficult to review a project where the process of viewing is absolutely random. There is little guarantee about what will be seen other than that it will always include a frame from The Family Circus and a quote from Nietzsche.

But in that, alone, I think exists almost the entire genius. There is something very different about coming across philosophy in a book about it, and coming across it under a comic that seems to illustrate normal family life. Add to that the magic of seeing children discussing deep and complex issues and you’re sure to get nothing short of magic.

In many ways the project evokes to me the very best of Calvin and Hobbes, the much-loved and much-mourned comic by Bill Watterson. A great example of this parallel is this pairing, in which the young Billy tells his very irritated mother that “The lie is the condition of life.” I can easily see young Calvin, having disappointed his mother, deciding that the best defense was that life necessitating lying. Regardless of how you feel about that sentiment, the magic of the pairing must at least make you smile.

Some pairing are surely more logical than others. The image above is rather serendipitous. But all of them are, in my mind, improvements on the original. And the inventiveness of this project is certainly worthy of praise. Now all we need is a newspaper to publish them…

One response to “Review: The Neitzsche Family Circus”