Review: The Sun is Always Brighter by Joshua James

Joshua James’s The Sun is Always Brighter is the artist’s second album, his first released on iTunes, and his zeroth available in stores. But where at some time in the past this would have been proof that he has no talent–or is signed to the world’s worst record company–being independent is now a viable option for many artists.

With CD sales declining, Joshua James may be part of the wave of the future in music distribution. His CDs are only available through the mail on the intelligent noise “label.” Whether or not that’s the future, his sound’s not nearly as innovative as his distribution system.

Mr. James has a a melancholy voice that’s reminiscent of Paul Simon, or perhaps Rufus Wainwright. And though his voice is slightly more energetic than those, the comparison gives you a good idea of what you’re going to hear.

And though his lack of innovation could be seen as a bad thing, what he does he does well. Certainly the sound’s not exactly something you’ve never heard of before, but that’s not a bad thing. And the lyrics are similar to many–Damien Rice and Elliot Smith both come to mind–they’re no less good because of it. Because of his Nebraska origins, I feel obligated to say that his sound is neither much like or unlike Connor Oberst of Bright Eyes.

Perhaps, my satisfaction with The Sun is Always Brighter is due in part to the narrow range of music I know well, and the lack of variety within that collection. And though these are good reasons that I shouldn’t review any record, I can’t help sharing this one. 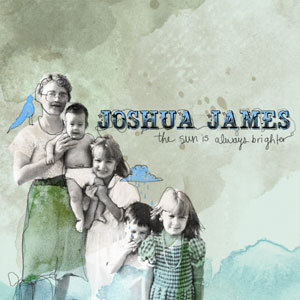 I don’t buy much music, in part because most of what I buy disappoints. But Mr. James had me satisfied after the first track, and kept up that contemplative melancholy which I’ve become rather accustomed to hearing.

So, whether or not I need to get some new tastes in music–something I increasingly believe to be true–I do have to recommend this album to anyone who’s a fan of any artist I’ve already mentioned. And if you don’t like them, I still think you should think about trying this one. Sampling’s only a click away (yes, that means it’ll start playing as soon as the page loads).

3 responses to “Review: The Sun is Always Brighter by Joshua James”