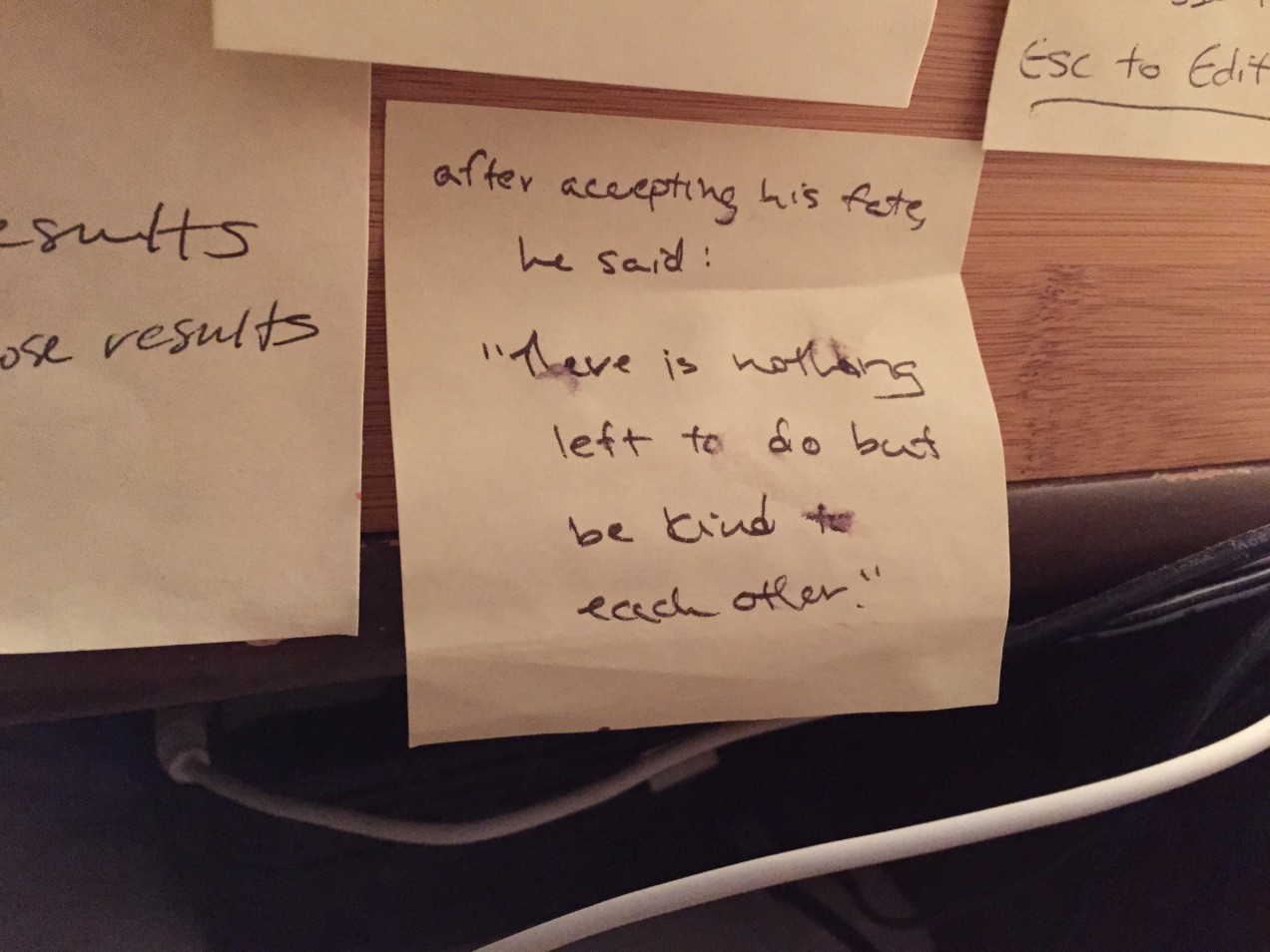 If you accept that you are mortal. If you see all living beings as kindred spirits. If you understand the value of “the Golden Rule” and find it to be the the only path worthy of consideration. Then there is nothing left to do but be kind.

Kindness isn’t easy. And it’s not fun and light and uplifting all the time. Sometimes it’s the hardest of hard work. But it’s the best, sanest, most valuable course of action.

To really be good at kindness, to be skilled and able in all situations to respond with a kind response that is appropriate and doesn’t make you feel like you’re just faking it, is the work of a life.

But I know that it is work that is valid, and the only thing that feels worthy of all of my enduring effort.

I know that if I were to be told I’d die soon my fondest wish would be that I could experience the kindness of good friends and have the ability to extend as much kindness as I could back to them. When I look at it clearly, I find it hard to dispute this notion I jotted down on a sticky note well over a year ago:

After accepting his fate, he said: “There is nothing left to do but be kind to each other.”

I briefly mentioned parental infallibility recently, and that lead me to seek out a story related to the topic from Hemingway, called “Indian Camp.” I should warn you, though, that if the story were a movie it would probably need an “R” rating for language and violence.

But today’s “Other People’s Words,” are the last few lines of the story, which are neither profane nor violent. They’re about the complicated issues of parenting, place, and dying.

They were seated in the boat, Nick in the stern, his father rowing. The sun was coming over the hills. A bass jumped, making a circle in the water. Nick trailed his hand in the water. It felt warm in the sharp chill of the morning.

In the early morning on the lake sitting in the stern of the boat with his father rowing, he felt quire sure that he would never die.

Zheng Xiaoyu was killed today for accepting bribes to certify fraudulent and dangerous drugs while head of China’s State Food and Drug Administration. The Chinese government hopes that this execution will showcase their commitment to food safety.

A fuller version of this story can be found here. But I found this story so interesting, and odd, that I gave it some thought. It struck me that there are two rather disparate possible realities on this issue, neither of which is likely the exact truth. Neither of these versions are completely factual, but both are possible ways to read the reported facts.

These two different versions of the story follow, retold in short form with help of the original article (which has since changed a bit). My fictional addition to the article are italicized, I didn’t track what I cut out of it.

BEIJING – China executed the former head of its food and drug watchdog on Tuesday for approving untested medicine in exchange for cash. During Zheng Xiaoyu’s tenure from 1998 to 2005, the State Food and Drug Administration approved six medicines that turned out to be fake. One such antibiotic, approved by Zheng, caused the deaths of at least 10 people.

“The few corrupt officials of the SFDA are the shame of the whole system and their scandals have revealed some very serious problem at the head of the old SFDA,” agency spokeswoman Yan Jiangying said at a news conference held to highlight efforts to improve China’s fight against its few corrupt officials.

Yan was asked to comment on Zheng’s sentence and that of his subordinate, Cao Wenzhuang, a former director of SFDA’s drug registration department who was last week sentenced to death for accepting bribes and dereliction of duty.

Yan told reporters that the men had failed to do their civic duties as SFDA heads, and hence have deserved the punishments to which they had been sentenced.

Zheng, 63, was convicted of taking cash and gifts worth $832,000 when he was in charge of the State Food and Drug Administration.

Last year, dozens of people died in Panama after taking medicine contaminated with diethylene glycol imported from China. It was passed off as harmless glycerin, showing Zheng’s failing as SFDA head.

Scandals over contaminated Chinese food exports have underscored isolated problems with adulterated ingredients and fake products in the domestic supply, raising questions of how well China could have guaranteed the purity of food for the Olympics without this execution.

The other story is behind the break. END_OF_DOCUMENT_TOKEN_TO_BE_REPLACED