Today is the 40th anniversary of the assassination of Martin Luther King, Jr. Inspired to find the words Robert Kennedy spoke in Indianapolis that night by Ron Klain’s account of the events, I’ve presented them below. Much of the speech is available on YouTube (if you don’t mind Italian subtitles).

I have bad news for you, for all of our fellow citizens, and people who love peace all over the world, and that is that Martin Luther King was shot and killed tonight.

Martin Luther King dedicated his life to love and to justice for his fellow human beings, and he died because of that effort.

In this difficult day, in this difficult time for the United States, it is perhaps well to ask what kind of a nation we are and what direction we want to move in. For those of you who are black — considering the evidence their evidently is that there were white people who were responsible — you can be filled with bitterness, with hatred, and a desire for revenge. We can move in that direction as a country, in great polarization — black people amongst black, white people amongst white, filled with hatred toward one another.

Or we can make an effort, as Martin Luther King did, to understand and to comprehend, and to replace that violence, that stain of bloodshed that has spread across our land, with an effort to understand with compassion and love.

For those of you who are black and are tempted to be filled with hatred and distrust at the injustice of such an act, against all white people, I can only say that I feel in my own heart the same kind of feeling. I had a member of my family killed, but he was killed by a white man. But we have to make an effort in the United States, we have to make an effort to understand, to go beyond these rathe difficult times.

My favorite poet was Aeschylus. He wrote:

In our sleep, pain which cannot forget
falls drop by drop upon the heart,
until, in our own despair,
against our will, comes wisdom
through the awful grace of God.

Let us dedicate to ourselves to what the Greeks wrote so many years ago: to tame the savageness of man and make gentle the life of this world.

Let us dedicate ourselves to that, and say a prayer for our country and for our people. 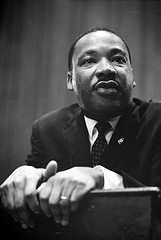 This last Monday, this country celebrated–to the extent that it celebrates any federal holiday–Martin Luther King, Jr.’s birthday. In honor of the occasion, the New York Times ran an interesting essay by Sarah Vowell that I couldn’t help but agree with.

Here’s what Dr. King got out of the Sermon on the Mount. On Nov. 17, 1957, in Montgomery’s Dexter Avenue Baptist Church, he concluded the learned discourse that came to be known as the “loving your enemies” sermon this way: “So this morning, as I look into your eyes and into the eyes of all of my brothers in Alabama and all over America and over the world, I say to you: ‘I love you. I would rather die than hate you.’ ”

The Bible is a big long book and Lord knows within its many mansions of eccentricity finding justification for literal and figurative witch hunts is as simple as pretending “enhanced investigation technique” is not a synonym for torture. I happen to be with Dr. King in proclaiming the Sermon on the Mount’s call for love to be at the heart of Christian behavior, and one of us got a Ph.D in systematic theology.