The Assassination of Benazir Bhutto 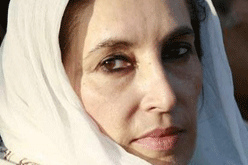 2 responses to “The Assassination of Benazir Bhutto”