“There is almost no problem we can solve all by ourselves” 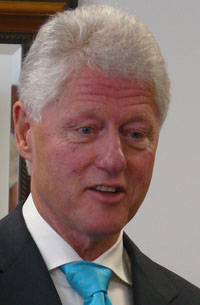 Former President Bill Clinton was on Charlie Rose last Friday. He said a lot of interesting things, and though they also did a fair bit of rehashing tired arguments about the presidential campaign, it is a pretty good interview to watch.

Without question, the line that most caught my attention was this one: Mr. Clinton said, making what felt like a rather precarious jump, that the American people now know as they never have before that “there is almost no problem we can solve all by ourselves.” That America’s citizenry recognizes that the problems we face as a country: terrorism, nuclear proliferation, climate change, health, and immigration, are all outside of the control of any single government, even the most powerful.

Though Clinton wouldn’t have been a good politician if he regularly denigrated the intelligence of the American people–as I sometimes think is appropriate–I do think he’s overstated the case. One doesn’t have to look very hard in this country to find people as convinced as ever that America has the right to impose its will upon the world. That its policy can and should be to unilaterally do whatever it wants, whenever it judges itself justified.

I have no doubt that those who easily forget that the United States is merely one country in a much larger world is shrinking and continues to shrink. But I find it incredibly hard to accept the argument that the whole populous has come to this revelation.

To be fair, Mr. Clinton is doubly right. More Americans than ever realize that their government doesn’t run the world, and every day a few more do. Further, he’s right in that the world is indeed a less “Amerocentric” place than at any other time since the Second World War.

Certainly, the attacks on September 11, 2001 shook a number of people out of the delusion that they lived in an impenetrable fortress from which they can run roughshod over the whole world and never face any consequences. Unfortunately, from there they went on to allow Mr. Bush to convince them that the wisest course to restore their illusory security was to depose Saddam Hussein–a hideous man no doubt, but hardly a grave threat to American security.

It is in Mr. Bush’s nearly-unilateral, (now known to be) misguided, and poorly executed invasion of Iraq that many Americans realized that they cannot persist as a hegemon. So too has Iran’s nuclear ambitions, Bush’s intransigence on climate change, and the many failed attempts to reform America’s broken immigration laws.

All of this has made clear that Americans do not have sole control over their own destiny. Though I hate the over-simplistic term, “the emergence of China” has clearly changed the world. For one, America’s recent economics hardships have been far more localized than many expected.

There was a time when a devaluation of the American dollar was an absolutely terrifying scenario for world economics, but it hasn’t had the expected debilitating impact. As the world slowly decouples from the formerly-all-important American economy (and thus its government), this country, like Britain before it, will have to recognize that it is not the king of the world.

Love or hate the former President, he is right about that.