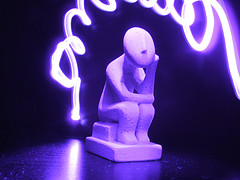 I noticed recently that I do this rather strange thing. I’ll think thoughts, and then I’ll restate them again as if I were speaking them. Even when I’m not speaking. Even when I’m the only one around.

It’s as if I have to “say” everything in order for me to have really thought it. That is, if I have to choose what to do, I immediately know that I have three options, about dinner for example, and what they are. But not until I articulate those options as if I were saying them aloud am I “done” and able to make the choice.

Certain that I’d noticed this phenomenon before, I went looking for it. This is how I explained it about two years ago (my apologies for it’s roughness):

for example, i do this thing where while i’m brushing my teeth or something my brain has two separate things running. one is basically what i would be saying out loud. it’s rather articulate and reasonable. and then there’s the lower level that comes up with where the articulated streaming is going to head next. and if something goes through the lower level and sounds reasonable i have to repeat it on the upper, more articulate, level. i don’t know why this is and i think it’s rather strange. i already know exactly what will come out of the more articulate string and yet i must MUST go through the act of thinking it or i may have never thought anything at all.

I’m now wondering, much as I was then, if this is normal. I think that it can’t be too abnormal because outwardly I seem to function nearly the same as everyone else. People seem about as fast or slow to respond as I am.

Part of the problem with this whole thing is that I have no terms to describe the phenomenon. The closest I can think of is that the lower stream is, essentially, the “subconscious,” while the repetition takes place, and translates it into the “conscious” mind. Perhaps psychologists really do use these words to mean these things, but I’ve never heard it.

I guess the whole point of this might be–and both parts of my brain are telling me I need a point–is, perhaps, how little I know. The fact is that I don’t often notice this odd dual-stream nature of my brain, even though I must assume that it’s always happening.

Perhaps, then, this whole thing is another lesson in paying attention. About how much we can notices if we just take the time to do so.

4 responses to “Thinking About Thinking”