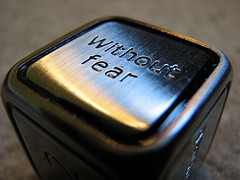 Fear is rightly synonymous with anxiety. Like anxiety, fear is essentially a feeling of discomfort or unease with a given situation. Dark alleys in dangerous neighborhoods are something of which I am fearful. They make me anxious.

Such a fear is reasonable in the proper amount. And should my fear make me more aware of my surroundings–better on guard–it may even be valuable. But that certainly doesn’t mean that fear itself is rational.

I think all fear nonrational. (I thought of both the terms “arational” and “subrational,” but this seemed best.) That is, it’s a subconscious process that serves unquestionable evolutionary purpose, but is generally maladjusted to the peaceful suburban life that most Americans–and others in the “first world”–lead.

Fear leads to discomfort in unknown situations. Two things can be said conclusively about “stage fright”: it grows out of being in an unfamiliar situation, and it has no constructive purpose. But as thousand of ten-year-olds can tell you, that doesn’t make it any less real. Your pulse quickens, your breathing becomes shallow, you quickly become either too hot or too cold.

Were your life in mortal danger, this fear could be a useful advance warning system that causes you to get the heck out of the there. And because you, as one who properly feels fear, knew when to get away to save your life, you’re the kind of person that gets to live long enough to reproduce. And because you reproduce, your offspring get this same useful thing called fear.

But eventually your offspring became domesticated. They don’t hunt much anymore, they don’t go to war as much as they used to. They rarely, for that matter, get in any meaningful danger for which fear is a proper response. And in a life such as this, fear is more a vestigial organ than a useful appendage. It’s like the tails humans have no use for, but still have visible remnants of.

Now certainly, fear is not vestigial for many people in the world. Those who live in close proximity with wild animals or armed humans can benefit from feeling that fear. It can be a useful warning that they’re in danger and need to flee.

And fear may have some useful purpose when you’re addressing a superior. Even if you live in a place where your boss or arresting officer has no (legal) ability to do you physical harm, it may be useful to be humbled by your fear and act subservient enough to prevent your firing.

But going before a small group of people to speak, read, or converse is no a useful time for anxiety. Your preformance is much more likely to suffer as a result of hyper-awareness than it is to benefit.

Make no mistake, I have nothing against fear. And honestly, in today’s world I’d rather experience it at times when it serves no purpose than not have it when it may do me honest good. But I sure like the thought that some day all forms of fear will be truly and completely vestigial.

One response to “Vestigial Fear”