This is the second part of a two-part argument that I seem to be constantly having with myself. The first half, Writing is Wasteful, was posted on Tuesday. 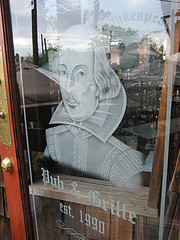 Surely it’s easy to come to this conclusion. Try this: read five random pieces of coverage or commentary on the presidential campaign written in any 24 hour window. You’re more likely to win the lottery than to find that those five pieces are all innovative, useful, and distinct. This problem is only magnified if you try to watch more than thirty minutes of continuous campaign coverage on television.

But–and this is critical–the “conventional wisdom” which all those pieces are likely regurgitating probably came from some speck of innovative writing or commentary. It doesn’t randomly coalesce without someone conceiving of it, translating it in a form that can be shared (read: words), and then transmitting it to others. That is the crucial tool of writing and the crucial thing that your example seems to miss.

And the idea that others may have spoken more eloquently of something in the past by no means says that others are reading what they wrote. It’s hard to argue that Shakespeare–to the extent that such a man existed–wrote some of the best tragedies of all time. But there are only so many people who will read or watch a Shakespeare play. However, reimagined by a modern author in a modern setting, such stories can be–and are–understood by a far larger contingent of people.

Nor is this to say that the only modern writing worth doing are adaption of great works of the past. There is also some value in writing that correctly harnesses something about the times in which we live. Whether fiction or non-fiction, there’s great historical value in such works.

But they’re also useful for their time. Good writing can be an incredibly useful–if not the only–way to spread valuable ideas about the state of the world. Abraham Lincoln famously called Uncle Tom’s Cabin “the book that started this great war.” Writing has undeniable transformative power, and though not all of it can start wars, all of it can have at least some impact.

All of this is essentially to say that writing is important and useful to the extent that it resonates with others and allows for better understanding of the past, present, and future. Surely there’s value in writing well for a small audience, even if you don’t see it at the time.

It’s easy to get down when you toil without external reward or recognition, but that’s no reason to drag the whole act in which you’re participating down into the mud.

One response to “Writing is Useful”