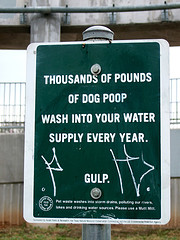 About seven months ago–wow, has it really been that long?–I instructed:

So next time you’re walking your dog, and someone asks you if you’re going to pick that up, do the right thing. Say yes and walk away. Leave the excrement where it falls.

And even when I wrote that, I wasn’t nearly so certain as it sounds. I expect I was mostly just excusing the fact that I didn’t pick up dog poop at the time.

Soon after that I had a change of heart. Though it would be useful to have a nice transformational moment when I realized how foolish my old logic had been–how I accidentally stumbled into a large pile of dog feces while walking in shiny new shoes–there is not one.

The simple reality is that at the time I was proudly declaring that one shouldn’t pick up dog poop, I was really just scared of the stuff. And reasonably so. Excrement of all kinds carries more bacteria than just about anything else we regularly encounter. And it’s certainly the most unsafe thing our bodies–and dog’s bodies–regularly expel.

But, I realized one day, it’s safer for everyone if I pick that stuff up with a layer of plastic between me and it, and then wash my hand before it goes anywhere near my mouth. It’s safer there than on a third grader’s shoe. Or a 67 year old’s. Safer too than having a mistaken toddler play with it. Safer than it having it leach into the water supply–an odd claim I’d never heard until I saw the above picture.

I still have reservations about the whole thing. Mostly it’s this: I’m sealing biodegradable waste inside a painfully-slow-to-erode plastic bag, where it will take up landfill space for hundreds of years. Now the plastic bag may have well ended up in the landfill anyway, but the poop could be, as I suggested last time, reasonably good fertilizer.

Were there to be a reason to leave those feces where they fall, that would certainly be it. But forced to choose, as a dog-walker regularly is, between leaving it and sealing it, I’ll now choose sealing nine times out of ten. (And that tenth time is probably hidden in high grass where it’s rather unlikely that anyone will walk within the next three months.)